THE BUILD UP PROCESS OF LIGHTNING

The most spectacular mythology event in the world is lightning or the thunder bolt out of the sky. This phenomenon has been researched for hundreds of years lead us to a greater understanding of the lightning process.

A lightning storm develops when the upper air becomes unstable due to the convergence of warm air on cooler upper air mass. This result in the raising of air current which carry water vapor, and condense give rise to a storm build up.

This small practical’s inter act and the speculation is that they are the positive charge and the bigger ones carries the negative charge. With the drafts the practical are separated into a “positive” and a “negative” clouds. The potential difference will increase over a period of time until the discharge will occur.

These discharges can happen in four different ways.
1. CLOUD TO GROUND
2. GROUND TO CLOUD
3. CLOUD TO CLOUD
4. CLOUD TO AIR

We are the most concern about the cloud to ground strike. The build up to this awesome event starts with a luminescent leader that forms in the base of the cloud and proceeds to wards ground in steps and form little branches. 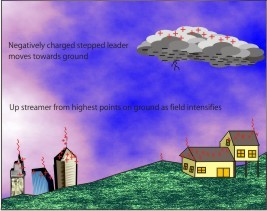 Because of the electrical field that gets stronger upwards streamers are initiated on certain points on the ground, and these points are not necessary the highest point on the ground. 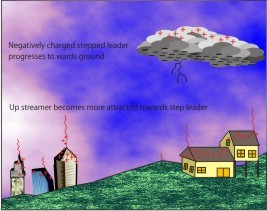 Under the right conditions the upward streamers will attract the downward leader and the ionization path between the cloud and the ground are complete. The lightning discharge is a much rapped event and only last for a view micro seconds. 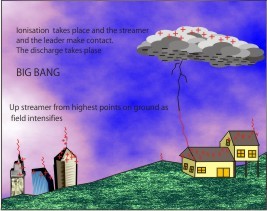 The average lightning strike are 45 000 amps but can be much higher. The rapped rise and cooling of the air around the bolt causes the thunder effect.

The core of the lightning bolt can easily rise to 60 000 degree centigrade.